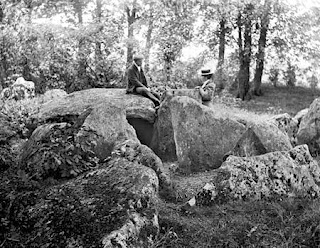 Hoping to be a little more on top of the blog this year so here goes with the first post of 2014. We return to the scarp slope of the Downs again, this time for a quick look at some recent blog postings by other people, about Wayland’s Smithy, the splendid Severn Cotswold long barrow that stands a couple of miles east along the Ridgeway from the White House. Unlike so many Neolithic barrows in the south, it stands more or less complete (or at least more or less completely restored), with easy access into the burial chambers. However, unlike West Kennet long barrow near Avebury, which commands clear views in all directions, Wayland’s Smithy is tucked up by a shelter belt of trees, limiting views from the barrow in most directions (although I remember once twilight visit in the middle of winter when the icy lights of Swindon could be seen glittering down in the vale). The trees also hide the barrow from the surrounding landscape, and it’s not really possible to see the barrow until the last minute if one approaches from the Ridgeway. Either way, the trees give the site a deceptively secluded feeling that belies its hilltop location. Although the 1st Edition OS map shows that the barrow itself was covered in trees in the mid – 19th century, the present shelter belt appears to have been planted at some point after 1910. Photos of the Smithy taken in 1916 by William Taunt and available on the EH Viewfinder website, show the site as it was before this tree planting and the 1960s excavation and subsequent conservation by RJC Atkinson and Vale native Stuart Piggott.

Pleasingly, Wayland’s Smithy has been featured in a number of recent blog posts. Digital Digging provides a good, basic overview of the site and its archaeology (), whilst the Landscapism Blog provides a more impressionistic perspective of the Smithy and the nearby White Horse. Finally, Dan Hicks has provided a short post on a model of Wayland’s Smithy made in the 1860s. 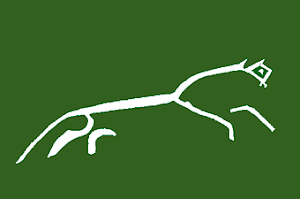